- September 12, 2013
A few years ago, I had the privilege of spending the evening with a saintly author, Wesley Duewel who was in his 90’s. In the course of our conversation, I happened to mention a recent scandal involving a well known religious figure, which made national news.Dr. Duewel seemed confused for a moment.
“I’m sure you remember. . .” I said and added a few juicy details. Then, the kind minister smiled and said, “Oh yes. ..it was completely out of my mind  until you brought it up.  I chose to forget about that.”I was appropriately rebuked.

"Much of our praying is like the little boy who rings the doorbell, but runs away before the door is opened."  --  Leonard Ravenhill,   Why Revival Tarries  (quoted in Herald of His Coming, Sept. 2012.)
Read more

The Wrestling Match: Winning by Losing 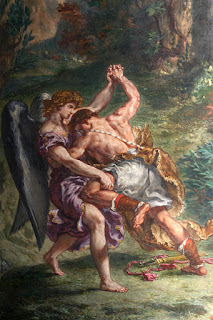 How small that is, with which we wrestle, What wrestles with us, how immense; Were we to let ourselves, the way things do, Be conquered thus by the great storm-- We would become far-reaching and nameless. What we triumph over is the small, And the success itself makes us small. The eternal and unexampled Will not be bent by us. This is the Angel, who appeared To the wrestlers of the Old Testament: When his opponent's sinews In that contest stretch like metal, He feels them under his fingers Like strings making deep melodies. Whomever this Angel overcame (who so often declined the fight) He walks erect and justified And great from that hard hand Which, as if sculpting, nestled round him. Winning does not tempt him. His growth is this: to be Deeply defeated by the ever-greater One (Marie Rainer Rilke, "The Man Watching")
Read more